Background: Bell's palsy is a paralysis of the seventh cranial nerve that controls the muscles of the face, leading to sudden weakness on one side of the face. Of the total, 60–75% of Bell’s palsy cases are considered idiopathic. Thirty percent of the patients have poor recovery as they may experience facial muscle weakness, facial disfigurement, psychological trauma, and facial pain.

Method: This study aimed to examine the awareness level regarding Bell’s palsy among the general population of the Makkah, Jeddah and Taif regions of Saudi Arabia. A cross-sectional study design was undertaken from June to September 2021, included 418 participants, and data were collected using an Arabic self-administered online survey. Institutional review board approval and informed consent were obtained.

Conclusion: The overall awareness regarding Bell’s palsy was unsatisfactory. More efforts, including health education programs, should be made to improve public awareness regarding this disorder and to achieve favorable outcomes and avoid future complications of the condition.

Bell's palsy is an acute peripheral, unilateral paralysis (or paresis) of the facial nerve that results in muscle weakness on one side of the face (1). Inability to furrow the brow, drooping of the eyelid, inability to close the eyelid, sagging of the lower lid on attempted closure, changes in the amount of tear and lacrimation and drooping of the corner of the mouth are common presentations (1,2). The etiology of this condition is mostly idiopathic, with approximately 60–75% of the cases considered idiopathic, while other uncommon causes include head and neck tumors, infections, neurologic conditions, neoplasia, trauma, and congenital cases (3). Several risk factors are related to this condition, such as diabetes, pregnancy, preeclampsia, obesity, and hypertension (1). Bell’s palsy can be misdiagnosed if history and examination are not carefully taken, and the misdiagnosis rate can be up to 10.8% (2). It is classified as a relatively rare condition; according to the UK’s National Health Service, Bell’s palsy affects 25–35 individuals out of 100,000 population, with a median age of 40 years. It has a lower incidence among children. There is no difference in prevalence between men and women, as it affects both equally (4,5). Bell’s palsy mostly has a good prognosis, as most patients may recover without any intervention. However, 30% of the patients have poor recovery as they may experience facial muscle weakness, facial disfigurement, psychological trauma, and facial pain (6).

A recent study showed a significant association between participants’ awareness and their sex, and the majority of the population (75.2%) had poor awareness toward Bell’s palsy (2). In a study conducted in Riyadh, Saudi Arabia, 85% of the participants were aware of Bell’s palsy, and 21% lacked knowledge on its progression (7). The contradictory results of the previous studies prompted us to investigate the awareness level in the general population of our region. The purpose of this study was to examine the awareness level toward Bell's palsy in the general population of Makkah, Saudi Arabia. 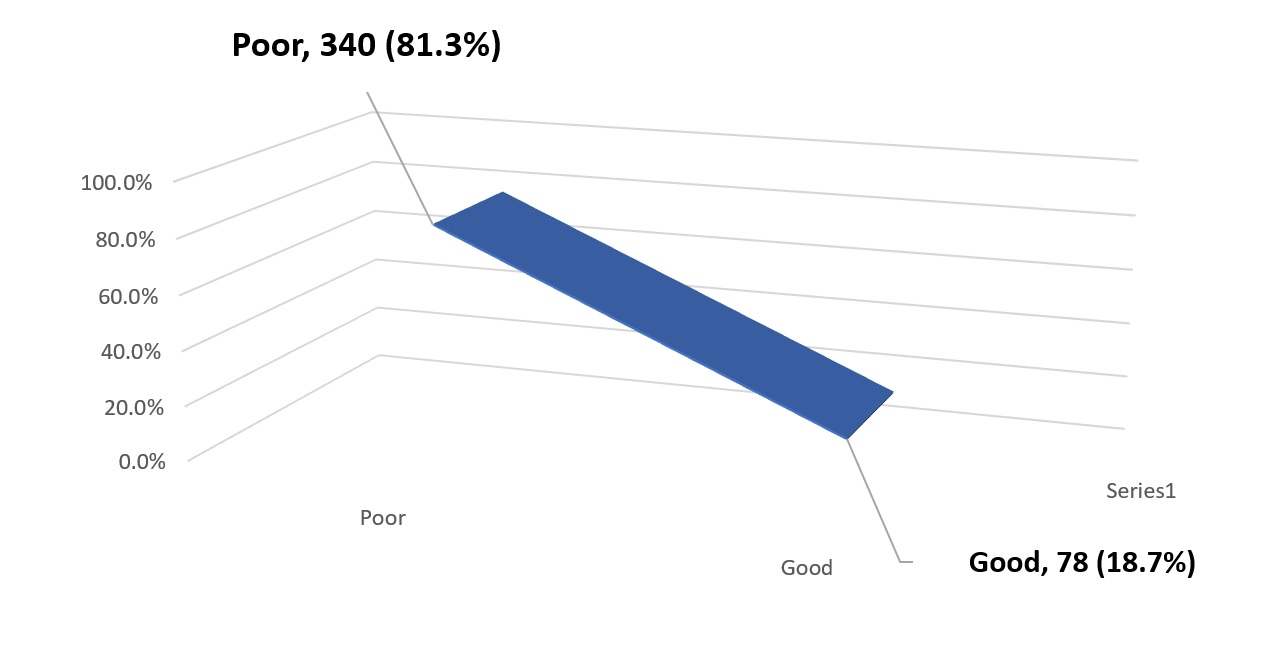 Figure 1. Overall awareness regarding Bell’s palsy among the general population in the western region, Saudi Arabia 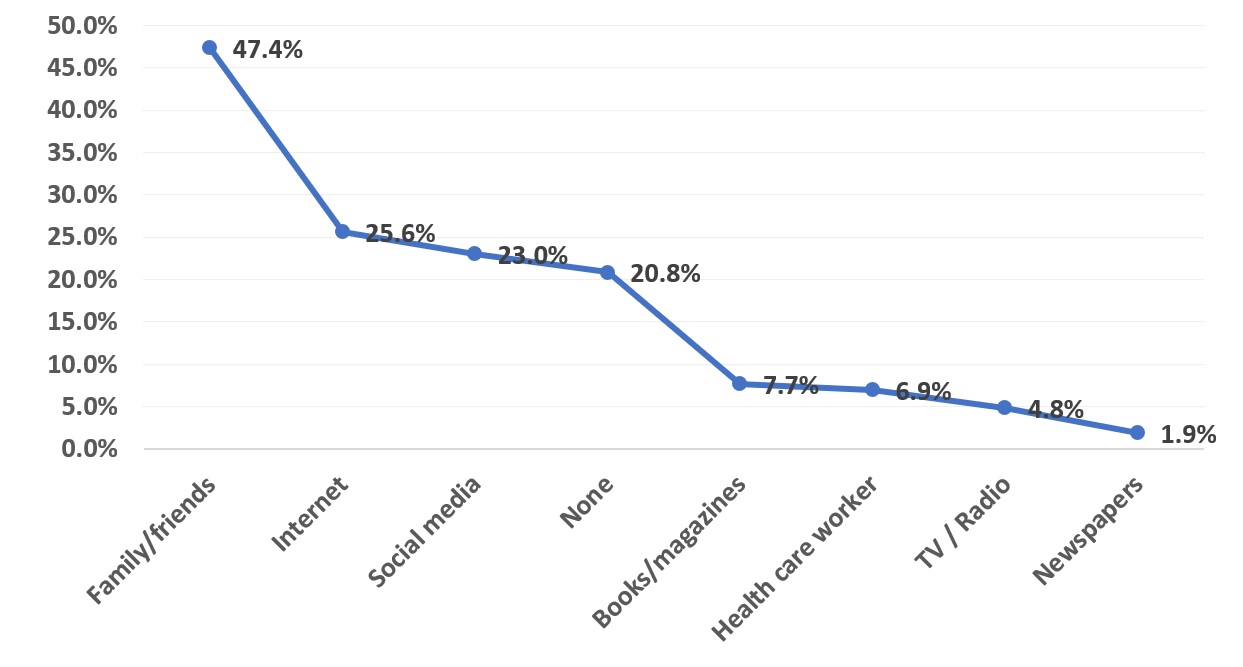 Good awareness was detected among 24.9% of participants aged 20–35 years compared with 10.8% of those aged more than 50 years, with a statistically significant difference (P=.022). In addition, 24.2% women had good awareness of facial palsy in comparison with 12.6% men (P=.002). Of the total participants with good awareness, 43.8% reported receiving information from books, 41.4% from health care workers, 30.8% from the internet or social media, and 3.4% did not mention a specific source (P=.001). The other parameters of the distribution of study participants’ awareness regarding Bell’s palsy by their data and source of information are presented in Table 4.

Table 4. Distribution of study participants’ awareness regarding Bell’s palsy by their personal data and source of information

Bell's palsy is the most prevalent cause of acute facial paralysis, accounting for 60–80% of cases, with an annual incidence of approximately 15–30 cases per 100,000 population (8-11). It is a benign ailment with 85% recovery rate, and its high occurrence may contribute to physicians' failure to notice more subtle manifestations of this benign and idiopathic condition (12). The main aim of this study was to measure the awareness toward Bell’s palsy in the Western region of Saudi Arabia. Previous studies correlated the level of awareness to sex, suggesting that women have a higher level of awareness regarding Bell’s palsy than men (2), which is consistent with the findings of the present study, showing that 24.2% of women had good awareness compared with 12.6% men (P=.002). Better knowledge and awareness were noted among 24.9% of the participants aged 20–30 years, compared with 13.6% of those between the age group of 30–50 years and 10.8% of those aged more than 50 years, with a statistical significance (P=.022). This result is contrary to the findings of the cross-sectional study conducted by Alamrani et al., in five main regions of Saudi Arabia from March to the end of May 2020 who reported that 32.6% of the participants aged 30–50 years had a good awareness of the disease (13). Another descriptive study conducted in Riyadh city through August 2018 showed that a higher Bell’s palsy knowledge was significantly associated with advanced age (P=0.001) (7). Unilateral paralysis of the face is the most common presenting symptom of the disease (13,14). In our study, the most common symptom of Bell’s palsy was the weakness on one side of the face (64.8%). In this study, 41.6% of participants correctly recognized the main damaged facial nerve (the seventh cranial nerve) in Bell's palsy condition which is better than that previously reported (24.5%) in a study done in 2020 among the general population of five main regions of Saudi Arabia (13). Nonetheless, worse than 87% was reported by Al Meslet et al. in Saudi Arabia, Riyadh, regarding awareness of Bell's palsy; the participants of the study were dentists with a superior understanding of the anatomical and medical background (15). A higher level of awareness was noted in our study of those who had health care workers (41.4%) and books/magazines (43.8%) as their primary source of information, compared with those who obtained their information through family and friends. Also in our study, a good awareness was detected among participants aged 20–35 years compared with those aged more than 50 years, with a statistically significant difference (P=.022). In contrast, a study conducted by Almutairi et al. in Riyadh revealed those who obtained information via the internet and the older individuals exhibited significantly higher mean Bell’s palsy knowledge scores (7). These findings are consistent with those found in a previous study (8), which emphasizes the importance of obtaining accurate information from credible sources. Among the studied participants in our study, the total prevalence of Bell’s palsy was 5%, and the correlations between overall knowledge of Bell’s palsy and the other variables were significantly higher than anticipated. In 2017 a study conducted by Alanazi et al.in the northern region of Saudi Arabia reported that the prevalence of facial palsy among the studied participants was 26.3% (61% females and 39% males) (16). A previous survey of the literature done by Peitersen includes 2,570 cases of peripheral facial nerve palsy studied during 25 years, which revealed a substantially greater prevalence of idiopathic facial palsy (17). The prevalence of Bell's palsy varies around the world, which could be due to changes in the frequency of occurrence in the geographical regions analyzed, as well as variances in the diagnostic criteria utilized and the methods used to collect and analyze data (18). However, in this study, the knowledge and awareness of Bell's palsy in the Western region of Saudi Arabia were mostly unsatisfactory, as 81.1% of the participants had poor awareness of this condition which was worse than the study conducted in Riyadh region, Saudi Arabia, reported that 85% of the general population was aware of Bell’s palsy (7). Alamrani et al., reported that approximately 75% of the general Saudi population has a poor understanding of Bell's palsy, particularly in terms of signs and symptoms with a relative better understanding of the causes and treatment of Bell's palsy (13). In addition, more factors that could be associated with the occurrence of Bell's palsy, such as smoking and cold air exposure, were missed, and these should be evaluated in further studies. Furthermore, more studies on the knowledge of Bell's palsy and its associations among the general population in different regions of Saudi Arabia are needed because this study was conducted only among the general population residing in the Western region.

The overall awareness regarding Bell’s palsy was unsatisfactory. More efforts, including health education programs, should be made to improve public awareness regarding this disorder and to achieve favorable outcomes and avoid future complications of the condition.

The authors declare that they have no conflict of interest

The study protocol was approved by the institutional review board of UQU. Informed consent was obtained from all participants prior to their participation in the study.

All the data is presented within the paper or available upon request from corresponding author of this manuscript.

All authors equally contributed to the manuscript.